These boards/animatics were homework assignments done in a one-month Animation Mentor class I took throughout the whole month of October in 2017.

---
​
This first board below was a half of a whole assignment. We were learning about camera shots, and along with grabbing some from cartoon/real life tv shows and media, we were to also create our own of each of the following:
Establishing Wide, Medium Close Up, Extreme Close Up, Down, Up, Over the Shoulder (One from EACH side of the conversation),  Back View,  Crowd
---
​
The prompt of this second assignment was to clearly retell a widely known story (in this case, Goldilocks), in 12-15 boards, no more, no less.
​
---

This third assignment involved the given theme "Restaurant", and I had to create thumbnails of an actual, real-life event of visiting a restaurant with friends/family.​ 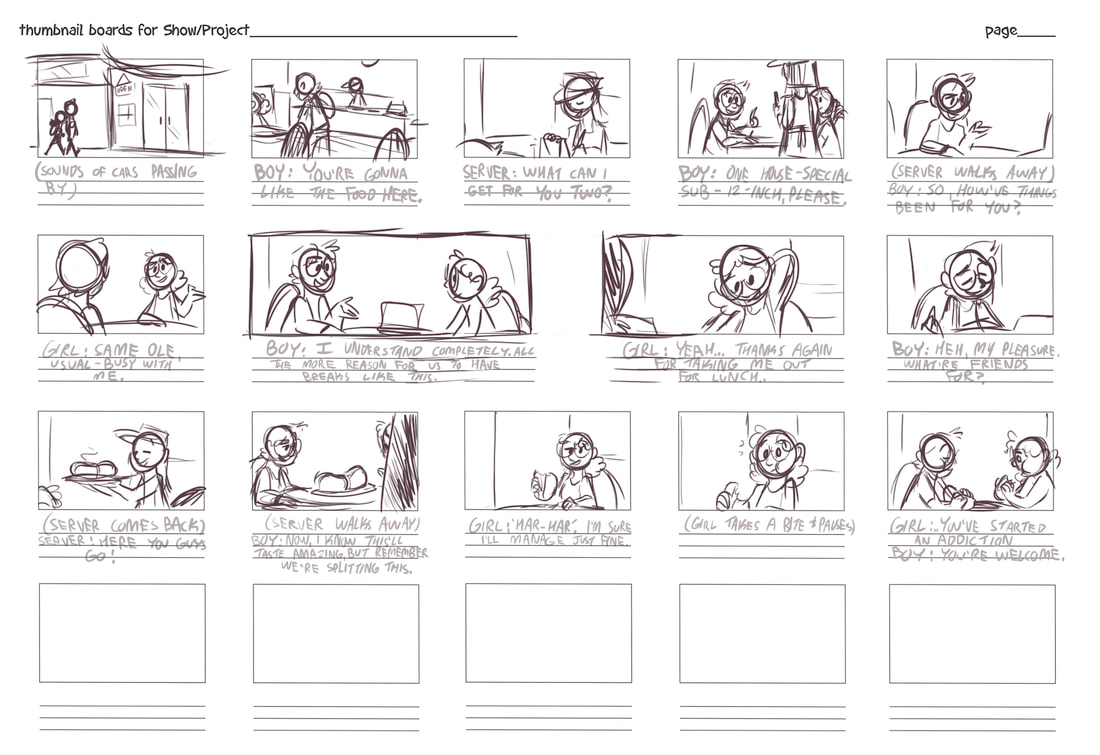 ---
​
Our fourth assignment (and a personal favorite of mine to work on) was "Gags and Humor". We were given a choice of a three possible prompts to work off of, and I chose this one:  "A PENGUIN is trying to fill up a slurpee cup at a slurpee machine that is much taller than him"
---
​
Our fifth and final assignment-- we were to "become storytellers" and portray a given prompt. I chose this one to follow:
Kid wakes up late for what he thinks is a school morning. The kid is always late and CAN’T be late again. He’s instantly in a hurry and panicked and not getting ready easily.  Everything, that can go wrong and delay him, does go wrong and delay him. He finally gets going but, in the end he will realize on the calendar (or phone, newspaper, younger sibling watching cartoons or something else) that it is Saturday and he coulda slept in until noon.